A week or so ago, we had a big gathering at a corn maze outside of Atlanta. It was a great deal of fun. Courtney, Emily and Christy and I went racing through the maze, trying to scare each other, and acting like kids. And just generally being the goofball that you need to be on the weekend to let all the stress out. 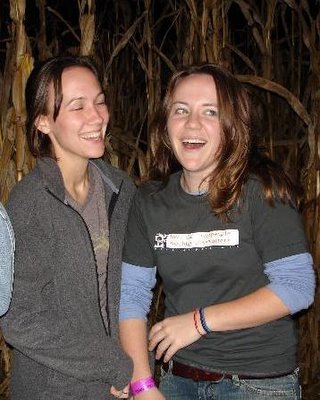 I like this shot because it makes Christy look devious, and she and I were the instigators of racing around corners and jumping out at Emily and Courtney. The maze was a bit too easy, and when I could tell that the path was a circuit, I raced ahead, and ran down an adjacent path, listening to them say, "Where's Kate? I think we lost her." And then it was my favorite when I raced up behind them and scared the living daylights out of them. It was good times all around, and I think I yelled and screamed enough to deserve the sore throat I now have.

I have been particularly stressed lately, and I finally got sick on Thursday evening this week. I guess I should have known it was coming. Besides the fact that everyone and their dog at school was getting a virus, I started to be loopy last period on Thursday. I couldn't seem to spell anything right on the board, and then when a kid said something funny, I just lost it, really lost it in front of my students.

But what would you do if a kid said that Bob Marley was the ghost who had his head on the knocker of Scrooge's door? The image was just too much for me.
We really weren't laughing at my student. I don't think he thought that. But once those words escaped his lips, and we all realized what he had said, we all had such a mental image in his head, and I could not get through a sentence of the story for at least five minutes.
Posted by kate at 12:01 AM

Who can help but be devious when dear Kate is around??? I'm missing living in the same house with you girl & coming up with all kinds of trouble. You are a treasure.

and whatmore, who can help but be devious when kate is KATING AROUND!!?? haha :) the corn maze story reminds me of the time we spent in chatty together 2 summers ago.. :)
happy thanksgiving, kate! i miss you here.

ah, stano, good times. it's good to hear from you. i've been thinking about you guys recently. i watched a movie filmed in prague, and i've been missing dear europe. Christmas time in trnava was great fun.
fish in the square, a chill in the air,
singing carols with ika playing her guitar with cold cold fingers, singing that christmas carol we all loved aGain and again! (what was it called?) and dancing to it at the Building after bible study one evening. the christmas market, and songs playing from the speakers in the streets.
good memories.
hello to everyone in Trnava.
I looked at Trnava with googleearth the other day. it is a spot of buildings and blurriness amid square fields.