I'm reading two books for the first time right now, for my seventh and eighth grade English classes, and enjoying them thoroughly. They're classics, but in case you never read them either, add them to your summer reading list. 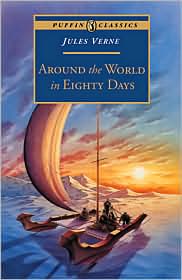 Around the World in Eighty Days is a blast. I can't believe I've never read Verne before. The characters are funny, and the plot suspenseful. (O-kay, I read the last few chapters [which is NOT a typical habit] so I'd know what to expect and could properly steer class discussion while we're reading it...but it's still been exciting seeing how it all pans out.)

If you don't know, Phileas Fogg is an methodical, home-loving Englishman from 1872 who takes on a home-loving butler Passepartout, only to tell him he's just taken a bet that he can get around the world in eighty days. The world having just been made that much smaller by the steamboat and train, he sets out to prove this to his whist-playing friends of his Club. So you follow him as he goes -primarily by boat and train- eastward around the world, being chased by a detective, and thoroughly convinced he'll have no trouble winning his two-thousand-pound bet.

It'll be a great cap-off-the-year read with the seventh graders who've been studying geography all year, to plot his journey round the earth.

The Bronze Bow is one of those books I recall my mother telling me several times to read, but I wasn't drawn in by the cover or time period, and I guess a bit stubborn on taking reading suggestions (which I realize is stupid, but I was 13). I've not gotten very far yet, but it's quite engaging.

The setting is Judea during the time of the Romans. The main character Daniel is a zealot, who's living in exile from his home town, hoping he's part of a growing army to throw off the Romans. He knows Simon the Zealot who begins to follow Jesus and tries to show Daniel Him.

We're starting our unit on the Romans in eighth grade next week...
I'm pedalling back and forth between them - getting sucked into one, and then realizing I need to keep up with my English class in the other. So far I've gotten Phileas Fogg into India, but it's really time to turn back to Daniel in Capernaum.
Posted by kate at 11:21 AM

yeah for The Bronze Bow!!! I had the same stubborn silliness as you (never read it because the cover was a bit weird) but finally read it last year and loved it! Funny how fiction can then inspire one to go back and read the Old T.

I never read The Bronze Bow until I was getting ready to teach it in fifth grade. I read it straight through, finishing in the middle of the night. How had I missed this book before?

Around the World, on the other hand, is a story I've enjoyed since elementary school. It maintains a delightfully dry sense of humor through exotic adventures around the world. Don't you wish we had the same number of travel options available to us today? Cars and airplanes are so boring compared with overnight trains, elephants, and transatlantic steamers.

It's fun to think of books as mutual acquaintances--"Oh, you know him too?"

(My "stubborn" book was The Little White Horse by Elizabeth Goudge. I love it now. Have you read it?)

we are ready for the wedding pictures now please.