When we woke up in the morning, we understood what it meant that our campground was in the Chisos Basin. We were literally in a bowl of mountains. We saw some deer bound through the campsite. 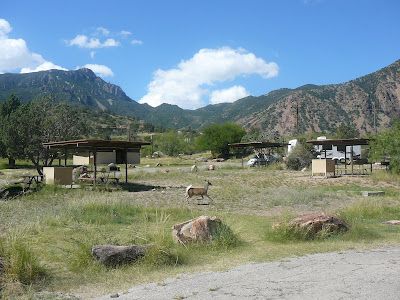 The place was pretty deserted Friday night/Saturday morning, but the following nights it was filled up for the 4th of July weekend. 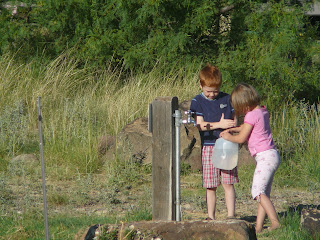 Daniel and Anna filling up the water jugs.
After we had breakfast and got ready for the day, we set out to explore the park. We drove up out of the basin, over the mountains and caught the view: 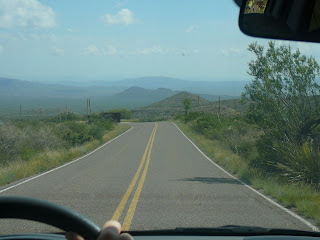 Daniel, who of course had slept through our entry (which was in the dark anyway), was duly amazed, and his face was priceless. (and he was willing to reproduce it for me to photograph.) 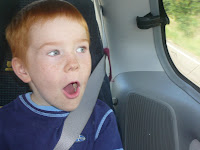 Anna's face was maybe a bit fake. (but so cute anyways) 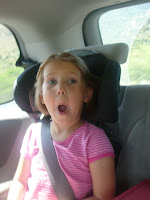 but Mark slept through it.
Generally, if we were in the car, he'd sleep. 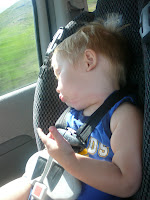 I think the first thing we needed to do was buy ice. The was pretty much a continual concern. It was, to put it mildly, hot there. Big Bend is simply really hot, and I'd recommend visiting it in April (besides the weather, more plants are in bloom then). A shadeless 105 degrees is brutal, and 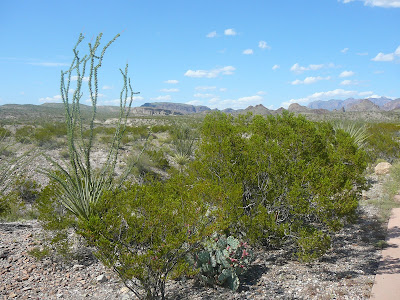 generally our thoughts, while outside, were consumed with finding shade or air conditioning. We went to the visitors center and walked around the small "garden" that had cacti labeled. I tried in vain to learn the plants so I could recognize them later. The photo to the right has, I think, as nice shot of some vegetation. The tall plant on the left, the signature plant of Big Bend NP, is the octillo, and it's not a cactus. It has the neat quality of being able to be cut off and stuck in the ground to regrow, and farmers would use it as a fence. In the foreground, hiding under the brush, you can see the prickly pear, which is a very common cactus. 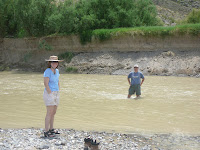 This one has fruit on the top, and that is probably the edible stuff. (I may perhaps sound knowledgeable there, but I have just about exhausted what I know...)

Our next destination was the Rio Grande in the southwest corner of the park. The kids slept through this stop, and Milan waded into the river...a bit far for Elizabeth's comfort, as I recall. But she was willing to photograph me in it too. 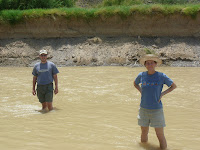 It looks like I'm a lot farther out than I really am. It was moving quite fast, and as you can see, very opaque. It looks like we're really close to Mexico, but it's just an illusion of the camera. It was a ways away, and if I tried to swim it, I would get swept a good ways down stream. Plus, that's illegal.
We went to another fort and refreshed ourselves with a cool drink. 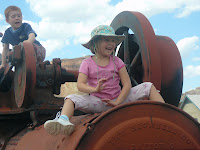 The kids woke up and we had lunch. Then they climbed on an old locomotive.

After this we attempted a hike. I believe it was our only real attempt, and

I say it was a valiant effort. We stopped at a trail along side the road to walk down into a canyon. Mark was put on Milan's back and Daniel and Anna were outfitted with water. But really, it was just too much. I got some great photographs of the adventure. But prominent in my memory is this image of Anna: very uncomfortable, and very unhappy. (Anna tried to later convince me she could have done more and would have liked to go on a real hike.) Here are the good photos: 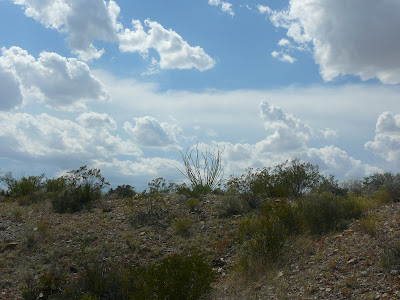 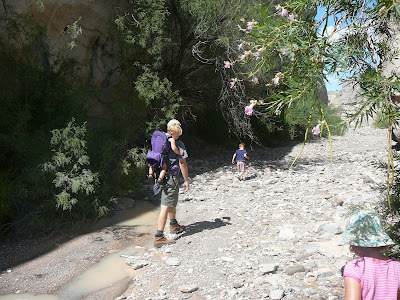 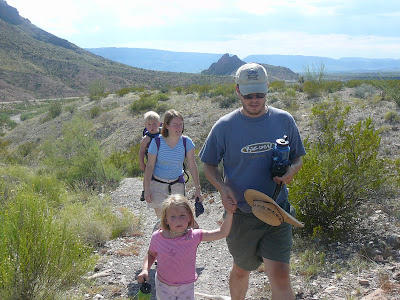 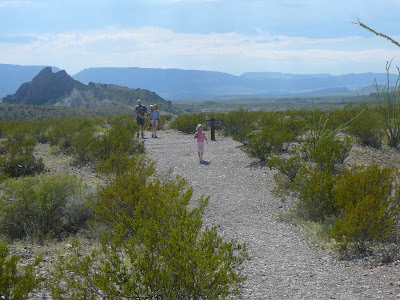 and we're nearly there now (but inconsolable) 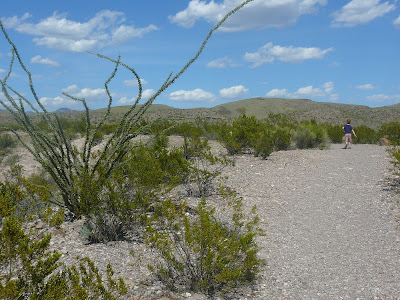 i think this is my favorite shot of Daniel:
he looks so small in the vast landscape

Email ThisBlogThis!Share to TwitterShare to FacebookShare to Pinterest
Labels: as an aunt, road trip 07, travel

thanks so much for reviving these memories. You do capture them so well. It was darn hot! thanks for doing it with us. The pictures are beautiful.