On November 30th
This Thanksgiving I flew to D.C. to spend the week at the home of my sister, her husband, and my new nephew, JT. My parents and sister came down from NJ, and David and Jodie joined us from SEATTLE.

They pointed out that I had written about my trip all the way up to the point when I got to their home.

So, I shall resume writing.

Much if this will have to be from memory. Not sure how interesting I can make it. But this is for posterity....so, let's be honest. How did it feel?


Basically, Seattle felt great. I loved it. I fell in love with the mountain views, the sky, and feel of it. The whole town feels fresh and recycle-y. I just like that. People (I generalize) do not recycle here and it drives me crazy. I say, "It's not a question of if we'll recycle, it's a question of how to recycle." And for some reason recycling is difficult here because 1.) most cities make you pay for collection and 2.) there are not recycling bins in many places. I just don't understand that. It should be a matter of course. I want to live in a city that recycles 60% of it's trash. Because at least that much is recyclable.


Like I said, I loved Seattle from the start. David guided me to his home, and we walked Ivy to a coffee shop where we could sit outside with her and sip lattes. Jodie met us on her run. The coffeeshops give dogs treats, so Ivy loves to go. 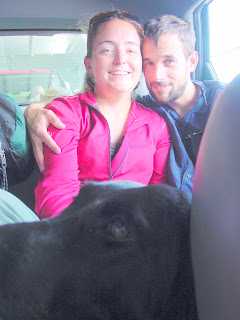 That evening we ate ethnic food - I forget, perhaps Ethiopian? We drove over to West Seattle and walked along a boardwalk where I decided I'd live. The next morning I had to get Scout checked up. She was past due for an oil change. I was excited because I knew that they would wash her. And they did. I can't really describe it in words how dirty she was. If you want to see, the trunk still hasn't been vacuumed out. Cheerios remain as evidence of camping meals.

When I picked her up from the dealer, the guy repeatedly said: "Your car was really dirty." I was delighted with her new shininess.

While my car was getting its tune up, we went downtown to the fish market and bought a fish for dinner to take to the cousins. The fish market is a tourist attraction where they throw the fish and shout orders, and it's fun to watch.

That afternoon we picked up Courtney from the airport and headed on a ferry across the sound. Boarding the ferry, a stern ferry-man questioned my NJ tag on the front of my car. Something about it not being legal to have two plates on my car... I tried to convince him people did that in Georgia, but he warned me I should take it off. On further thought, we decided it might not look too good as we were crossing the border to Canada, so I did remove it, and it's been gone ever since. I wish I had a European plate to replace it.


We arrived at the cousins' as Javan was on a ladder, putting different splotches of paint on the new wall and trim to see what colors everyone liked best. Their new house is on beautiful property overlooking the water. Javan and I took a kayak out to let down the crab trap so we could have a dessert of crab after our salmon dinner. *Ah, the joys of the northwest.* 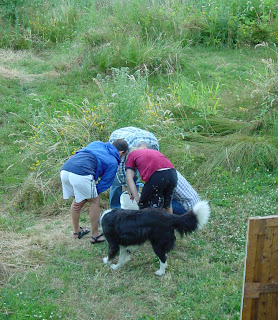 (David, Uncle Bert and Javan bringing in the crabs.)
Uncle Bert has an incredible telescope, and we got a fantastic view of Mt. Baker from their porch. I felt like I'd be able to see a climber on the side of the mountain. 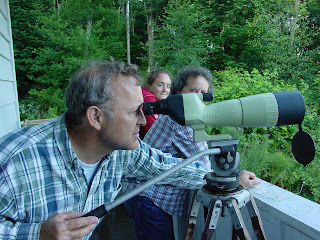 The next morning was Sunday, and Courtney and I headed off to Port Angeles listening to a Tim Keller sermon. We had convinced Aunt Karen and Joel that they should come up to Duncan too, so they drove up later, planning to walk on the ferry. We parked Scout in line for the ferry and made the most of our hours in Port Angeles. We visited bookstores, walked up to the residential area where we got a view of the bay, 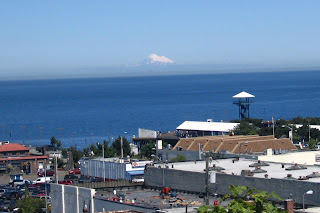 stopped to watch some sand-sculpturers, 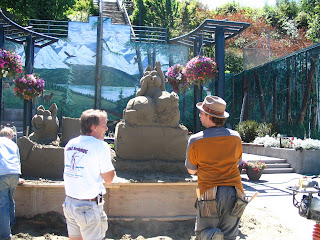 poked around in a junk-shop where I bought a tiny backgammon set, and then settled down in a cafe to play the game.

Courtney dared me to walk all the way back to Scout holding the board game like a briefcase. Most amusing. 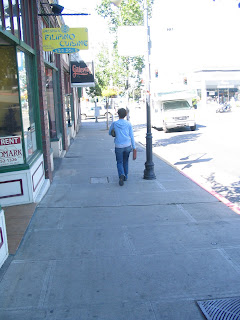 Our time in Duncan was restful and fun. We spent 4 nights there - the longest I spent in one place since Dallas. 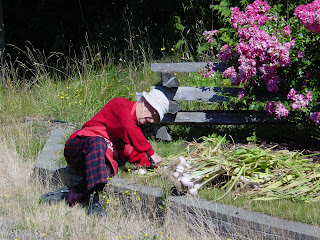 Waiting for the ferry at Duke Point, Nanaimo on Thursday, July 20th
and today I am 24.

We had a good time in BC. Very good.
We swam, rode horses, 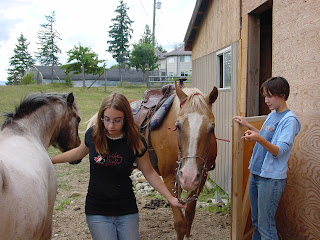 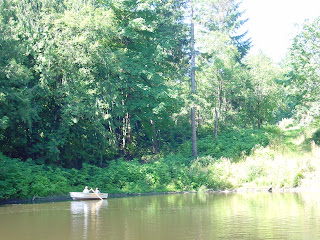 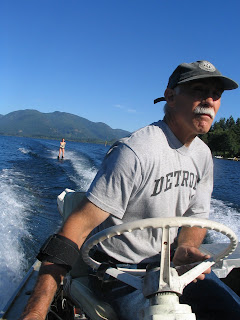 (Uncle Bill, driving the boat for us)
That was the best. Paul got up on skis and I kneeboarded which was tons of fun. 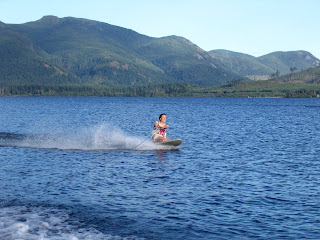 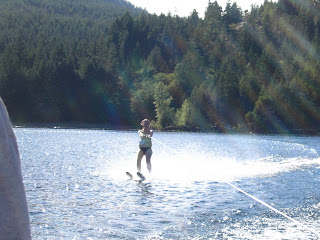 (Courtney skiing. Isn't it the most beautiful place to ski? We paid for it in temperature though.) 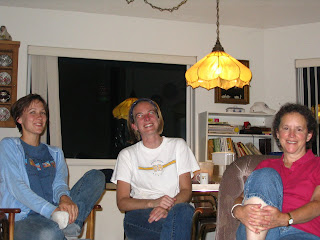 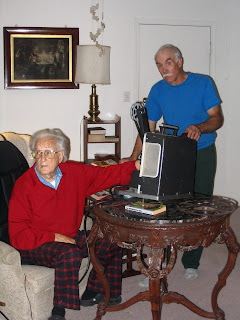 On Tuesday (before Aunt Karen and Joel had to leave) my family had a little birthday lunch for me: they put a candle in a pan of chocolate-marshmallow bars Grandpa made.
It was hilarious. 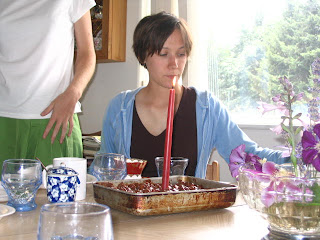 That afternoon we drove into Victora and stopped at Ceragem for a free massage. fun. We dropped Aunt Karen and Joel at the ferry and Courtney and I went to tea at the Empress--quite an extravaganza. 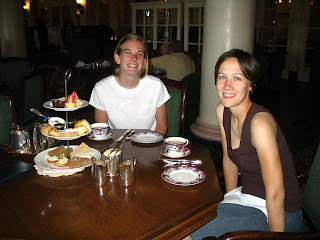 Then we walked around Butchard's Gardens, intoxicating ourselves with roses. 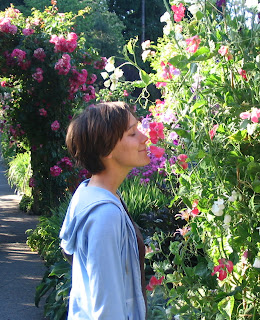 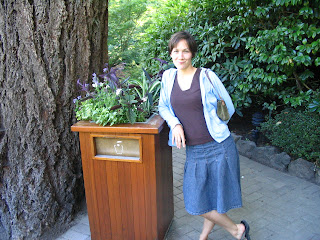 (...and being silly. I think this beautiful trashcan is silly, anyway.)
All in all it was an excellent time in BC. Of course we also took a visit to the Country Grocer to stock up on good tea. On the way up to the ferry I stopped in at the "Senior Center" to say goodbye to Grandpa who was carpet bowling.

We got a lot of weird stares there, seeing as we were the only ones not octogenarians. 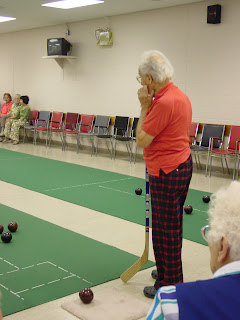 Tonight we'll spend in Seattle with David and Jodie again. Then we'll head east on I-90 to reach Yellowstone by Saturday night.


Friday 7/21
Today we spent the morning in Seattle. We drove down through the locks and watched people getting their yachts ready for a weekend sail. Then we cheered on the salmon jumping up the fish ladder. That is one of the most amazing things in creation.* 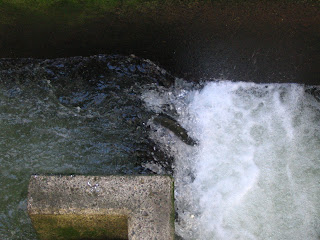 
It was a strange feeling to be heading toward home after so long driving away. I must admit I felt some regret. I hadn't tired once of driving, and I never did get that sick feeling in my stomach of moving further away from home and not being able to get back.


But there were still many adventures to come.

*I also really like goats now. (these are my cousins') 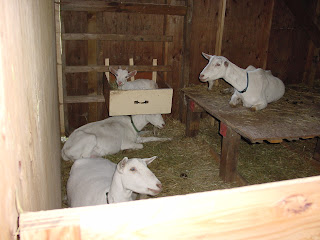 Comment on recycling... I grew up in a recycling, composting family. Recently, at work, I realized we were throwing away cardboard (which my family does not do) and that I could take it to Whole Foods. So I now collect it and take it every week or two, and I was really sad to see how much we must have thrown away in the past.

Recycling, of course, can be harder than trashing things; but I've discovered that it's just as easy to recycle my paper by throwing it in our compost bucket, so that's my new thing. Let the little earthworms feast away on junk mail!

Your post kind of makes me miss the northwest, and I've never even lived there. But perhaps I will someday too. Carol

Hooray for new posts and GOATS and SUMMER! If only we had stopped in Missoula to refill ou' coola!

That's sweet that you compost too, Leah. Do you do that in your backyard?