Jeremy, Brent and I drove down the coast today, stopping to stock up on groceries and take scenic pictures. As soon as we passed Monterey, the coast became astounding. It is gorgeous. There are cliff-dunes (self-named) – sand that seems to be hardened and formed into beautiful shapes, even some hoodoos. The water is a deep blue-green, the sand, white. 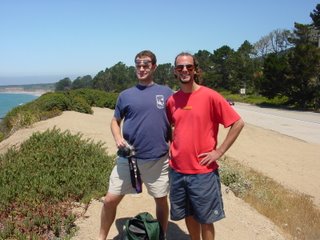 The CA coast is very beautiful. Not, I think, so stunning, unbelievable, other-planet-like as the 4 corners were, but it is gorgeous. 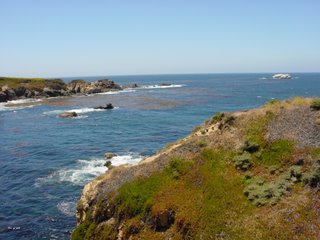 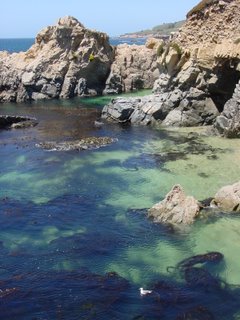 We camped out for a few nights around Big Sur. Needless to say, I didn't journal a whole lot then. I recall good conversations and much joking. More memorable occassions were looking for the biggest tree in the park...and leading the guys, including Jeremy's injured knee, on a long goose chase that was hardly worth the adventure. But having fun just the same. 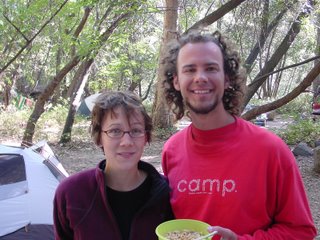 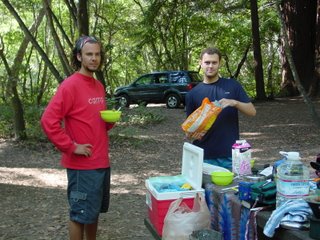 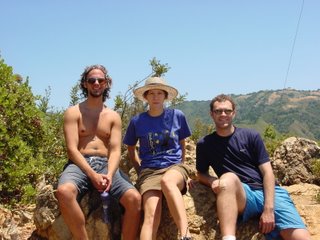 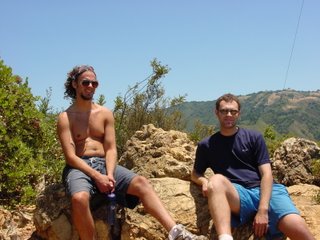 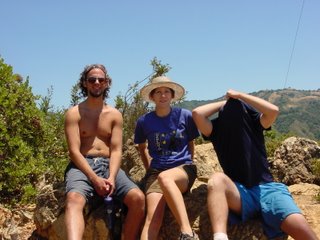 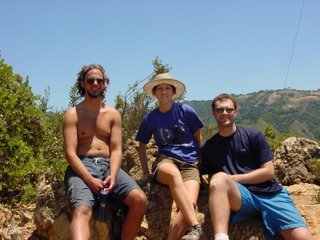 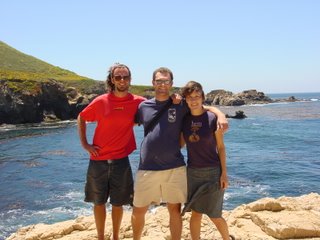 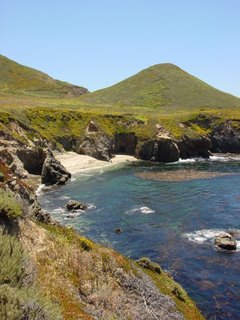 On Tuesday we drove back up the coast, stopping at a winnery for a tasting and tour. Never been to a winnery before. I learned a lot about making wines, and paring. (Which I actually learned about in San Francisco.)

Then we visited an old Spanish Mission, which was pretty neat.

We dropped Jeremy off at the airport in the evening, and Brent and I found a campsite further up the coast, after crossing the Golden Gate Bridge one more time. 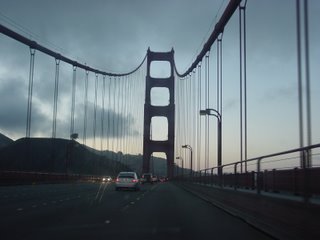 We spent a few days in the Redwood NP. Good times were dinner on the beach and a mandatory dip in the ocean which was our only bath for the week. It was lovely on the beach at sunset, even though the clouds insisted on rolling in just as the sun sank low. We drank hot cocoa, watching otters play in the waves.

Then mostly I recall excessive wetness and fog. We were camped at a walk-in site about a half mile from the car, so we trekked up there with as little as possible. We were rather foolish and didn't put the tent fly up, and were drenched by who-knows-when-in-the-morning and had to put the fly on. I say 'who knows when' because neither of us had a watch and then we ended up not getting packed up and back to the car until 10am. The fog had never lifted, and we had no idea it was so late. We started off on our day after breakfast, but my tire with screws in it finally gave way. We had to put on the spare which was an ordeal: first we had to empty the perfectly-packed-trunk completely to lift out the spare. Then we had to replace the tire and return it to the trunk, which then had to be reloaded up. We drove to the nearest town to get the tire patched up, and the whole process had to be repeated. I have an image of myself sitting in the camping chair, reading by the side of a small-town road, with the contents of my car all around me, while Brent dealt with the tire-people.

We managed to still squeeze a hike in through the redwoods before getting on the road again. 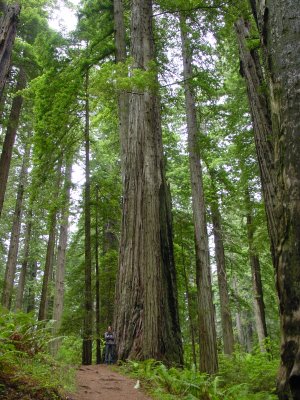 We didn't have much time, but we had picked a strenuous I think 2 mile hike to the ocean and back. My brain is fuzzy on the details. All I recall is determining to go very fast so we could get to the ocean, but it was a steep way down, and a steeper way up, so it was exhausting. 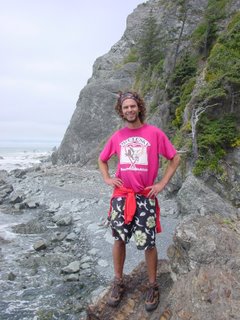 We stopped that night in Portland with some friends of Brent's and had a much needed shower. The next morning we saw some sights of the Columbia River - a beautiful gorge. 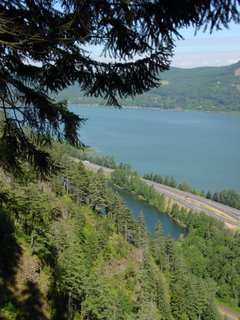 Then we drove to the fair city of Seattle, with its mountain views. I dropped Brent off at his parents' house and managed to find my way to David and Jodi's despite crazy Seattle streets. I still determined I wanted to move there.
Posted by kate at 4:50 AM

It's so nice when I go to your blog and find a new installment of the trip, or current happenings. Thanks so much. Now I'm looking forward to seeing the accompanying picture when they appear. Love, Mother

just did some catching up in your adventures out West. How COOL! Would love to see you again soon!

Seattle is my "if I only could move there" destination - I love it! --Corny's friend Erin