Drove from Canyonlands to Bryce via the Natural Bridges & Capitol Reef 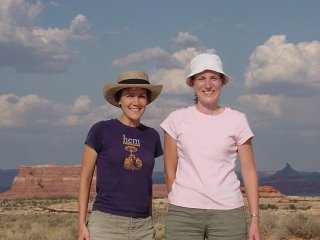 The campsite last night in the Canyonlands was definitely the most animal-y and buggy. There were uninhibited rabbits and chipmunks. There were bugs everywhere, it was quite irritating. But, on the other hand, it was nice to be so close to animals. I was lazing in bed – the first time I didn’t get up first, roused by the sun – and was half-awake-half-asleep lying on my stomach when a chipmunk scampered – yes, scampered across my butt. I was startled, to say the least, but then excited that an animal actually came so close to me. Later I was sitting on a chair by the fire pit, crouching so gnats wouldn’t swarm my head, when a chipmunk ran up, not two feet from my two feet and it hopped in the fire pit, dug around a bit, and then carried off a piece of charcoal. Pack rat! What’s he going to do with that?

Oh, and a HUGE caterpillar landed on Elizabeth and I quickly brushed it off and it left little prickly hairs on the tip of my fingers, and on her leg too. Most pecuible. I had to use tweezers to get the little guys out.


We stopped for lunch at the Natural Bridges Monument which I learned is a monument because Teddy Roosevelt declared it as such – a president can declare a Nat’l Monument, but it’s not preserved in the same way a park is. Teddy did a lot of good for NPs. Anyway, I walked up to my car as a host of kids were piling into a truck and one girl was looking at my windshield picture and making a comment about it – “Isn’t that Bob Dylan?” just as I was walking up behind her.

Driving on to Bryce we finally actually saw cows in the road, after seeing “Open Range” signs for days.
Posted by kate at 6:29 AM